A Fistful of Credits: Episode Two

A quiet descends over your freighter as the ship tunnels through hyperspace.

Ben and Rell head to the cramped medbay where Tal-Nor-San helps them patch up their wounds. After a bite to eat, Rell spends some time researching Adar Tallon. At Tal-Nor-San's suggestion, her astromech droid, BLU, hacks into the comlink you took from the Imperial officer back on Kwenn Station and develops a program to decrypt everyday Imperial communications sent over regular frequencies. He installs this on your own comlinks: when you get to Tatooine, you'll be able to monitor low-security chatter. You all get some rest.

Twelve hours later, you come out of hyperspace. Before you, a glowing sphere hangs in space, the rays of twin suns reflecting from the endless sea of sand that covers its surface: Tatooine, a desert planet. Soon, you are hailed by space traffic controllers. Ben's smuggling past allows him to come up with a plausible story and you are directed to docking bay 94 in Mos Eisley, the planet's administrative centre and largest settlement. 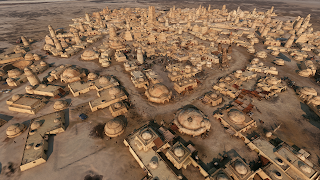 After dealing with a gruff customs officer, you make your way into this wretched hive of scum and villainy. Immediately you notice that the centre of town is thronging with well-armed ruffians representing an infinity of species.  These bounty hunters are harassing the locals, asking questions aggressively, and buying up local supplies. There's a noticeable absence of Imperial authorities.

You slip into the cantina to get the lay of the land. Bounty hunters abound here as well, ranging from painfully inexperienced greenhorns to scarred veterans of a hundred chases. The place is also popular with the local toughs. Two tusked and hirsute bullies are bothering an elderly human woman. You intercede, with Ben charming the bullies with banter and generous offers of drinks while Rell and Tal-Nor-San extricate the woman and introduce themselves. She is Edu Harn, and she numbers among the earliest non-Indigenous settlers to arrive on Tatooine in the first colony ships. Only a few of the old-timers remain; life was, and is, hard on Tatooine. She tells harrowing tales of the raids of the Sand People and warns you against going into the desert. You ask her about Adar Tallon and show her the commandant's image from your research; Edu replies that she does not recognize the visage. "She ain't in this town, that's for sure: I know everyone in Mos Eisley!" However, Edu figures if there's someone hiding on Tatooine, there's one creature likely to know about it: Labria, who specializes in selling secrets. He's not in the cantina at the moment, but she tells you he's certain to show up there once the twin suns have set.

You offer to escort Edu home and let her guide you through a tangle of narrow streets to her humble dwelling. She thanks you. You invite her to join you on your ship for dinner, but she declines: she feels safest at home.

You make your way back toward the centre of town, thinking to sample some street food and buy provisions at the market while waiting to meet Labria. As you come around the corner of the Mos Eisley general store, you stumble onto the scene of an altercation. Four mean-looking bounty hunters are engaged in a heated dispute with a tall human male. The latter is tall and athletic, with a lantern jaw and prime-time-TV good looks. He stands his ground bravely while his companions, a gleaming protocol droid and a one-metre tall furry biped, look on with growing concern. Fingers, claws, and various appendages jab accusingly; shoulders are shoved; voices rise. Finally, the human raises his hands in a gesture of conciliation and backs away, trying to defuse the situation. The bounty hunters seem to relax. Then the human makes a mistake: he bobs his head dismissively and turns to walk away. A second after his back is turned, one of the bounty hunter draws his blaster in a single smooth movement and fires, once. The man pitches forward and falls face down on the sandy street, a smoking hole between his shoulder blades.

The locals quickly clear the scene. The bounty hunters level their weapons threateningly at the crowd and back away toward the marketplace. The protocol droid and diminutive furball rush to the fallen man, only to confirm that he is, indeed dead. The small one waves his spear menacingly at the retreating killers, but they ignore him. You dash to the scene just in time to prevent him from launching himself at his friend's attackers.

Despite your entreaties, none of the locals are willing to help you. Tal-Nor-San gathers up the dead man in his arms while you speak to the protocol droid. He is Q1-A0, and the dead man is Lon Killis. With them is Flitray, an Ewok from the forest moon of Endor. They have been on Tatooine for less than an hour. You offer to take Killis back to his ship, which is at docking bay 92. On the way there, you figure out that Killis was dispatched to Tatooine to make contact with you after Rebel intelligence received your cryptic message sent from Kwenn Station. Realizing the docking bay is secured with a lock, you decide to return to your own ship to get your astromech droid in the hopes that it will be able to open the lock. Leaving the body of Lon Killis aboard, you quickly return to the streets.

Before you can access the unfortunate comrade's scout ship, you learn that a squad of Imperial troopers has been dispatched to secure it. They are already on site! Listening in on the Imperial frequencies, you hear the squad leader report that they are aboard the ship but have found nothing unusual. The Imperial officer at HQ orders two troopers to return to headquarters to pick up a droid in order to perform a more thorough search of the ship's computers. Fearing the Imperials may discover sensitive information, you resolve to disrupt the plan. Following the two troopers as they make their way through town to the prefecture, you choose your moment: a narrow passage with little traffic. Sprinting forward undetected, Ben gets close to the troopers and, his blaster set to stun, shoots them both. One shot misses, but Ben dodges the return fire and downs the trooper with a second blast. You look up to see a crowd of Jawas staring at you. They've seen everything. You gesture at them to be off and begin dragging the troopers into an alleyway. The Jawas melt away. You pray they don't turn you in...

Donning the armour of the unconscious troopers, Ben and Rell step out into the street and retrace their steps toward the docking bay while Tal-Nor-San and Flitray bind the prisoners securely before following. The two impostors bluff their way into the docking bay, presenting Rell's astromech droid as the unit designated for the search and informing the other troopers that they are to return to HQ. In short order, BLU succeeds in slicing into the scout ship's computers and removing any compromising information. You contemplate some way of disposing of the ship or disabling it, but before you can attempt either, Ben's and Rell's helmets receive messages from HQ, demanding the reason for their tardiness. You reply reassuringly, but as messages fly back and forth between HQ and the other troopers, your deception is revealed. The four troopers are ordered back to the docking bay to detain you! Ben, Rell and BLU quickly leave the scene, joining up with the others on the streets and slipping into Mos Eisley's web of narrow alleys. Lon Killis's secrets are safe, but the Imperials' suspicions are aroused. And you have yet to pick up the trail of Adar Tallon. 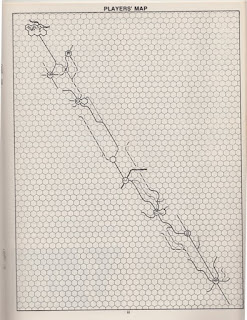 Alternative players' map for D1-2, Descent into the Depths of the Earth 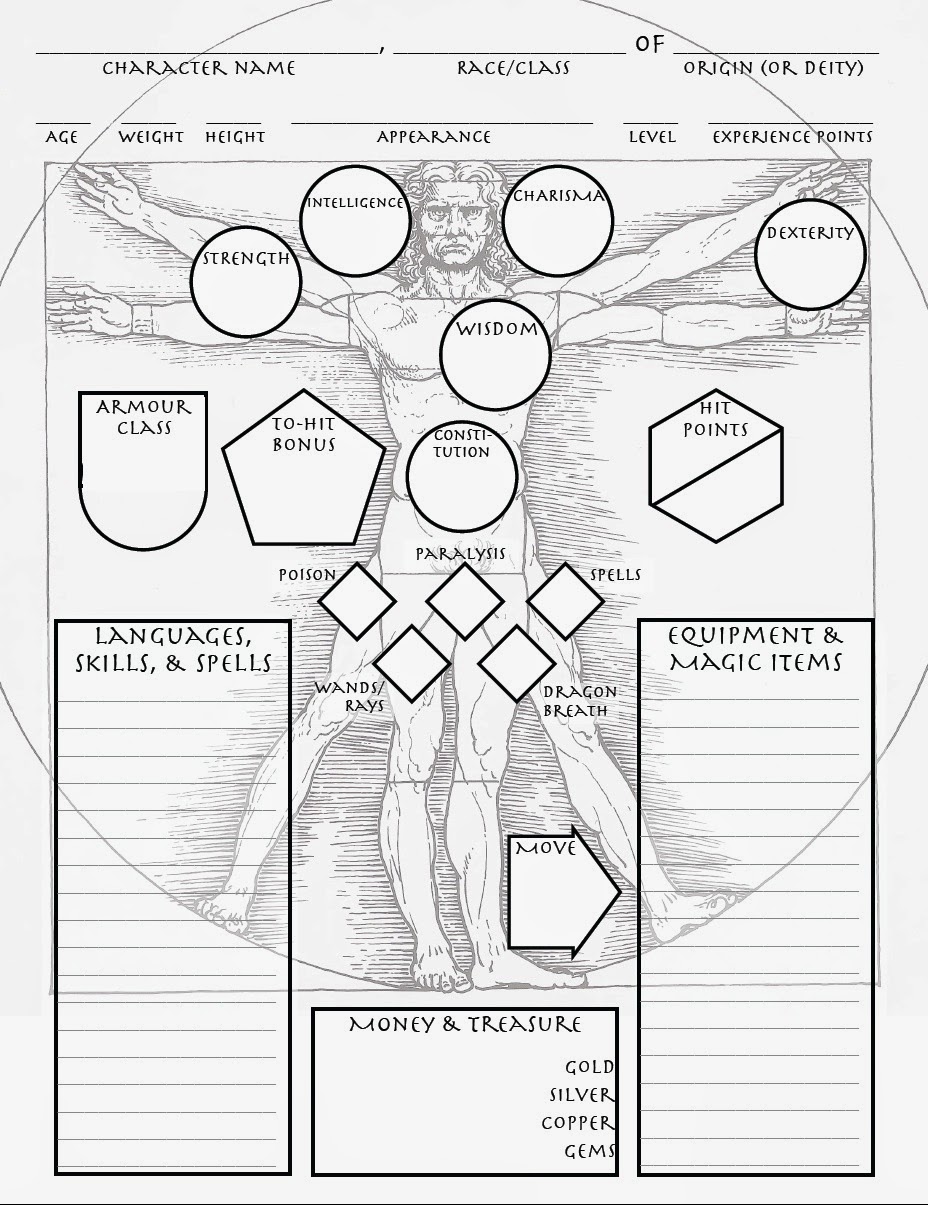