Letter III - Death on the road

I write to you from the locks at -------. We are resting, having just fought a sharp battle in the night. I put pen to paper now, not knowing when I will have a chance to write again.
Counsellor Anarion has sent us back to Talsit. It is believed the cultists will strike there next. A fifth has joined us: Araval, a lord from another world who, through some arcane means, was unwillingly brought into this one.
We set out at once on the same ship I arrived in. We had not passed the first lock when word reached us that something was blocking the river ahead. Though it was night, we set out at once -- I mean Aethelred, Mishka, Maratose, Araval, and I. Above the lock we found a strange scene: the mutilated bodies of several locksmen and signs that many others had there been killed. We continued on, risking a little light, following the tracks of oxen leading north. We fairly walked into their ambush. Orcs! There were eight of them. 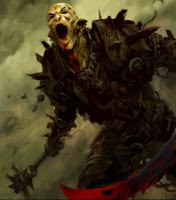 Their leader was a great brute: stealthy and cunning. He struck from the shadows and nearly skewered our dwarf. His armour resisted our blows for a while, but at length I struck his weapon from his hand and Maratose delivered a killing blow.
Dawn is nigh and will, I hope, resolve the mysteries of the night. Farewell, brother! Stay away from Talsit until you hear from me again!

I write to you from Gaisen, where unimaginable things have taken place. I do not know how soon this letter will reach you, but when it does I urge you to leave Talsit with your family at once and go to stay in the country. Try to convince mother and father and our siblings to go as well: the city is not safe. Go at once! Do not tarry! Read the rest of this letter at your leisure.
I wrote you last about my departure with the Togapa. Our voyage was uneventful. My eyes were opened to the workaday world of sailors and I shared their joys and their toils. Though I had no experience at sea, my trained agility put me in good stead with my employers. After several weeks of travel, we put in at Gaisen, only to discover the city in ruins! Many were dead, others were dying. I did my best to help them. Near the devastated harbour I encountered by pure chance a strange group who, as it happened, knew more about what had happened than anyone. 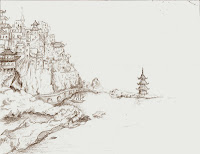 The tale they told was strange and terrible. Strange cultists, devoted (it seems) to the destruction of the world itself, have discovered the means to create great glowing rocks that, upon command or trigger, explode with a great conflagration of fire. Such a device they set off in Gaisen the evening before my arrival. Whole districts were levelled and the docks consumed in flame. The strangers I met had tracked these cultists over great distances, had stolen into the deep recesses of their lairs, and had fought their demonic minions. Had I not seen the destruction before me, I would not have believed their tale.
Brother! They believe the cultists may be headed to Talsit. Now you see why I warned you at once to flee.
Who are these strangers, you ask? They are an unlikely lot, I confess. One is a dwarf: a proud warrior, enamoured of mead, beer, pottage, and violence (not necessarily in that order). He also has, it seems, an affinity for oiling his body, perhaps to better show off his muscles. He is named Aethelred. Another is Mishka, a barbarian tracker from a distant land. She speaks not our tongue, but makes herself well enough understood with the few words at her command. Then there is the inscrutable Maratose. The first day I met him, he spent the whole time lingering motionless and silent behind his companions. He later livened up, but that first impression has stuck.
The governor at Gaisen died in the cultists' attack. A counsellor named Anarion has taken charge of the investigation and has asked me to attend a council on the matter. My captain has given his consent and I am most willing to offer whatever assistance I can. Aethelred, Mshka, and Maratose are also involved. We shall see what happens tomorrow, but I predict that our fates will be intertwined.
May this find you safe and well. Wait not for news! Leave the city at once, I beg you.

Letter I - A monk's new beginning 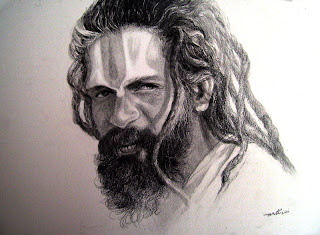 Peace and blessings be upon you. By the time you read this I shall no longer be in Talsit. On ------ last I joined the crew of a Togapa merchantman bound for distant lands and cannot say when I will return.
What precipitated this sudden turn of events? It might have been an incident that occurred the night before. Having emerged from a lengthy meditation on the All, I decided to take some air and found myself wandering the streets of Talsit, in the district near the temple of -------. It is a poor neighbourhood, and at night is (as you shall soon see) full of the dangers born of wretchedness. Deep in my thoughts, I was surprised by two rough men who threatened me with their makeshift weapons. Murder and robbery were on their minds. I dealt with them easily enough with my bare hands (it is not for naught that I have pursued the arts of kalari payat these past years!) but felt dismay as I knelt over one of them to tend to the injury I'd inflicted on him in self-defense.

Such was his miserable condition that he could not imagine receiving any mercy from someone he'd tried to kill. Imagine, dear brother, his shock when I offered him all the money I carried so that he need not kill and steal to survive. I felt it was right to do, but the deed brought me no happiness. Instead I felt a deep despair at the existence of such desperate poverty in our fair city. You and I and our dear siblings grew up in the midst of wealth there, barely giving a thought to the lives of the poor whom we saw every day in the streets as servants carried us past in our litters.
When, despite father's angry protests, I fled from my former dissolute life of idleness and became an initiate, I thought I had joined the "real" world. But, my brother, in truth the life of a monk in a temple is just as removed from the realities of the people as that of the aristocratic sybarite. As spartan as my new life was, it had no more connection to the struggling masses of our great city than did my previous life of luxury.
I felt, then, that I must go out into the world and see for myself how people live and how the All is manifest everywhere -- in the fields, on the seas, in the deserts and atop the mountains. The next day I went down to the harbour and found a berth on a large ship bound for the ocean.
I write you now from the locks near -------. May this find you in good health. Does father still refuse to hear my name mentioned in his presence? If not, pray give him and mother my love.