Note to readers: This is a session re-cap of an ongoing D&D 5th edition campaign set in a loosely adapted version of N. Robin Crossby's Hârn. A journal of sessions 1 through 54, beginning in February 2015, can be found here.

It is near sunset. As the long shadows of the nearby trees stretch across the snowy plain, you float across the battlefield in misty form. Snowlined craters and scattered bodies tell of powerful explosions. The corpses are those of human warriors clad in the style of armour worn by the sentinel Dracul spotted atop the icy tower. Frozen solid in this frigid clime, it is difficult to tell how long they have been dead. Juan becomes corporeal and applies himself to looting the bodies, only to find that many appear to already have been stripped of personal possessions. Many are also missing limbs that appear to have been severed after their violent deaths.

Movement near the forest edge catches your attention as the sun dips below the horizon. A half-dozen white-furred gargun — the smallest variety of the species — creep forth from the shelter of the trees and begin picking their way down the slope to the battlefield. Dracul become corporeal and strides confidently toward them, bellowing and brandishing his Searing Sword. Seeing only Dracul and Juan, the gargun bend their bows and loose arrows. Juan returns the favour while Dracul charges, but before the distance can be closed Gil'Doren drops a Fireball on the unfortunate scouts, creating yet another crater in the frozen earth. Cade, still Wind Walking, drifts up the slope even as Dracul's eagle eyes detect more movement amidst the trees. More gargun, it seems, lurk in the forest, uncertain of the nature of the threat. A theatrical breath of flame from Dracul clinches it: they flee. Cade floats behind and soon locates their lair deep in the woods, sending Stiepan the crow to direct the others to the site.

While Juan and Dracul mount guard outside, Cade and Gil'Doren Wind Walk into the warren of narrow tunnels that comprise the gargun lair. Following sound and smell, you emerge into a large cavern where a chaotic gaggle of gargun are loudly debating what to do. Some propose fighting, others flight. They seem to suspect that Queen Elvanna has sent a fire-breathing demon (Dracul) to hunt them. Using Prestidigitation and Thaumaturgy, Gil'Doren conjures a spectral head in their midst and, in a booming voice, calls for them to obey him. There is a minute of stunned silence, then panic. The gargun flee in every direction, emerging from various bolt-holes and scattering throughout the forest.

As you explore the cavern further, you discover a lone elderly gargun, paralyzed and blind, who has been abandoned by his fellows. Fangstench (as he is called) is convinced Gil'Doren must be some kind of god — an impression the elf encourages by providing various forms of miraculous succor to the suffering creature. Fangstench explains that the gargun of this land were once Elvanna's allies, helping her to overthrow the leaders of the human kingdom and take their lands for her own. Once installed on the throne and certain of local support, Elvanna turned on the gargun and had her servants, both human and others, hunt them down. Only a few pockets now remain. Yet the gargun hoped that their fortunes would soon improve, for they knew that Elvanna was a daughter of Baba Yaga and, according to lore, would thus only walk the earth for 100 years. Though gargun timekeeping is imperfect at best, they knew from the local humans that Elvanna's time was up... in theory. They were understandably dismayed when it became clear that Elvanna was continuing to rule well past her expiry date. Several weeks ago, a strange walking hut had appeared in the south and begun moving toward the icy tower. Fangstench's comrades witnessed what happened next: on the plain, Elvanna's forces staged an ambush. Though many of her soldiers and creatures were slain by powerful magics, Elvanna somehow succeeded in overcoming the hut's sorcerous occupant and carrying both off to her tower.

You decide to rest in the gargun warren, after spending considerable magical effort to eliminate or mask the most loathsome smells and filth. Keeping watch from within the safety of Leomund's Tiny Hut, you detect creatures creeping into the cavern. They look like gargun, but move in eery silence and with unnerving malevolent purpose, their eyes bottomless black pits. Frustrated by the magical barrier, they slink into the passages to wait. When the protective spell ends, Gil'Doren Dimension Doors to the surface with Fangstench while Cade, in giant badger form, rushes through the tunnels to the surface. But the undead gargun are upon him before he can make it! A desperate struggle in confined dark spaces ensues, but through liberal doses of fire and the transmuting of earth to stone, Cade manages to keep his attackers at bay — though several of their claws rake his legs and leave him feeling dangerously weakened and drained.

Safe on the surface in the harsh sun of a wintry morn, you pause to consider your next steps.
Posted by Peter C. at 12:23 PM No comments:

As the pale winter sun climbs to its zenith, you sprint through the fresh snow toward the line of the forest, seeking cover before the flock of black birds reaches you. Slipping into the shadows of the tall conifers, you conceal yourselves well as the birds swoop amidst the trees. They are ravens! Cade the druid has hidden himself poorly, and soon the birds swirl about him, cawing menacingly. He listens to their speech: they are seeking the intruders spotted from the tower. Find them! Find them! Suddenly a great mass of spidery webs appears between the trees, netting more than a dozen of the birds: Gil'Doren has deployed his wand. As the trapped birds struggle to free themselves, the unrestrained ones seek to escape, but volleys of well-aimed missiles (loosed, thrown, and magical!) from Galindo, Juan, Dracul, and Gil'Doren bring them down. None of these ravens will report your existence to the tower.

(One of the ravens thus killed was in fact Cade, who had shapeshifted into a raven in an effort to insinuate himself into the group. Juan was so unnerved at having killed his comrade that he fumbled his next shot badly.) 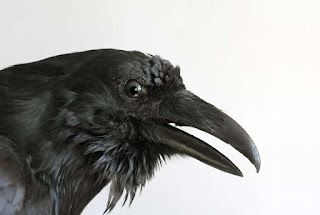 Through Animal Friendship Cade coaxes one of the trapped ravens to stay by his side and share what it knows. The raven, Stiepan, and its fellows serve Queen Elvanna as messengers and spies. They live in an aerie atop the icy tower and are cared for by a human named Jairess. Stiepan remembers seeing an odd structure with bird's legs being carried into the tower a few days ago. Baba Yaga's hut, perhaps? He advises the party to submit to Queen Elvanna, for she is powerful and wont to cruelly punish those who thwart her, as the ravens know well.

Meanwhile, blasts of Dracul's fiery breath dispatches the other ravens still trapped in the webs.

While Galindo keeps watch from atop a tall spruce, others rest in Leomund's Tiny Hut. Galindo sees a massive winged shape emerge from the forest near the base of the tower — a white dragon spirals into the sky and begins a zigzag course over the forest and the plain, moving ever closer to the portal. Seeing your tracks in the snow, it follows them back to the treeline. From within the hut you hear the trees creaking as the dragon pushes its massive body between the close trunks, peering and sniffing for signs of your presence. Wary, it backs off and takes flight, returning to the tower. From the treetops, you spotted several columns of smoke several miles to the east: a forest village, perhaps? You decide now to investigate further. Wind Walk-ing across the distance, you discover a frontier settlement, a score of dwellings at most. The inhabitants are human, hewers of wood and drawers of water. Their speech is strange to your ears. A fortified wooden storehouse dominates the western edge of the village, and a strange icy statue of an imperious queen towers over the village square. The villagers lower their heads and stop talking whenever they pass near it.


Pursuing your course, you follow a well-trodden trail leading south through the forest and back toward the plain. It is not long before you discover a strange sight: signs of a massive battle fought recently with sword, arrow, and spell. You stop to investigate.
Posted by Peter C. at 12:23 PM No comments:

After a hurried council of war, you plunge through the glowing blue portal... and emerge in a sunny but bitterly cold wintry landscape. Though there is no storm here, the cold bites even more deeply than before. You are in the midst of an open plain. As on the other side, a circle of jagged columns of ice surround the portal from which you have stepped. To the north and east, a forest of snow-draped evergreens lines the horizon. Rising above the treetops you can see a distant pale tower, its icy flanks reflecting the sun's rays like a mirror. You have little time to examine your surroundings further before another ice devil rushes toward you across the plain. As Dracul rushes to meet it in battle, the sound of howling reaches your ears through the crisp air as the first members of a pack of white lupine creatures emerge from the forest and lope across the plain in your direction.

The battle is fierce, but you prevail in the end. Loosing well-aimed arrows from atop an elephant (Cade), Juan and Galindo inflict devastating damage on the devil, equalling the mighty blows from Dracul's Searing Sword. Badly wounded, the ice devil attempts to flee but is brought low by a final arrow from Gil'Doren, whose fireballs had also decimated the pack of winter wolves.

As silence descends over the battlefield, Dracul's eagle eyes zoom in on the parapets of the ice tower: an armoured figure, its features obscured by the gleaming metal helm on its head, stares in your direction. A flock of dark flyers spirals about the tower and peels away in your direction: crows. Servants of the tower, perhaps?