The Dream, part I

You spent the morning meeting with Aranath the Elf Queen in the palace in Elshavel and have subsequently traveled swiftly to the western borders of her realm to investigate an anomalous zone of wintry weather that is slowly expanding, bringing with it dangerous creatures that threaten elvish lives. As you prepare your camp for the night you recall the queen's parting words, uttered as she looked at each of you in turn, her penetrating gaze seeming to plumb the very depths of your souls:

"I thank you for investigating this threat to my people. Your path will be a perilous one, but I sense that you will find help from unexpected quarters. This you should know: when outsiders first come to my realm, they are frequently visited by vivid and compelling dreams—often ones in which they are required to face terrible dilemmas. Do not be afraid! These visions are not real; they reflect what you have experienced in the past as much as what you fear in the future. But there is more: these dreams may also explain things about the world that your mind has not fully realized. And remember: what we do in our dreams is an important as what we do in our waking lives. Good luck to you." 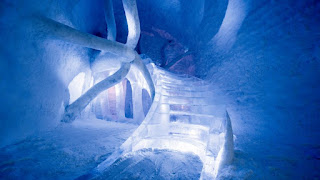 As predicted, the dreams come. You "wake" to find yourselves no longer in Leomund's Tiny Hut, but in a strange built environment constructed of ice and snow. Your bedrolls are arranged about a pool of water in the middle of which stands a fountain. There are no lamps that you can see, but a pale blue glow emanates from many surfaces. And just as strange: Maslorius is not there, but in his place is another gnome you have never seen before. Not only that, but Klor is with you as well, though you are certain that he is hundreds of leagues distant in Azadmere. The strange gnome identifies himself as Wizdale and seems as nonplussed as you regarding these odd surroundings.

Four corked bottles float in the pool beneath the fountain; each seems to contain a roll of paper. Cade pulls one forth and unstoppers it; inside is a handwritten message:


Help me! I am being held prisoner. Go north from the fountain to find my cell. You will be richly rewarded!
— Baba Yaga

But which way is north? There are seven exits from the room: five passages (one very narrow) and two archways. From one direction you hear howling, as of a wolf; from another, you hear a distant scream. You opt to head toward the source of the scream. As you proceed, Gil'Doren voices the theory that this is some kind of communal dream through which Baba Yaga seeks to communicate with you.

Scouting ahead, Wizdale and Juan (who seem to be forming some kind of rogue-ish bond) discover a pantry; on a table within lie four freshly baked pies. (It was, indeed, the intoxicating smell of fresh baked goods that drew them in this direction.) Without further investigation, a pie is shared: mincemeat, and devilishly good. The sound of singing attracts their attraction, and they sneak carefully up a flight of stairs, motioning the party to follow. Not all the others are as skilled at stealth, however, and their noise causes the singer to pause and call out: "Malevix, iz zat you?" Dracul is stunned to hear his father's name.

The singer is revealed to be a yeti chef (with a French accent), busily preparing some kind of stew in a vast cauldron. With an enormous cleaver, he is hacking pieces from what could be a giant's bloody thigh and tossing them into the pot. His inattention is such that it is no problem for Juan to approach and deliver a mighty thwack from his crowbar to the back of the chef's head. He turns, regards you quizzically, and collapses like a (huge) sack of potatoes. 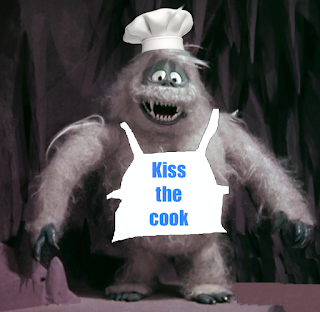 After binding the creature, you manage to revive him for interrogation. He readily divulges details: he is the head chef in this prison, responsible for feeding both the prisoners and the guards. He serves Queen Elvanna and is aware that the latter's mother, Baba Yaga, is being held here. He does not know the precise location of her cell, but he knows which way is north. (It's the opposite of the way you came.) He is expecting a visit from Malevix, the dragonborn guard captain.

Meanwhile, Wizdale eats another pie and nearly breaks a tooth on a metal object within. A key! But to what lock?

Taking a door that leads to the north, you find another pool, fed by a spout set high in the north wall, and another surprise: Cade! Or rather, a female version of Cade. She looks displeased to see you, and attacks. A vicious druid vs. druid battle ensues, at one point involving two giant crocodiles locked in struggle. The gender-swapped Cade falls to your spells and blades, yet Cade feels lessened, somehow, by the victory. (A greater restoration spell from Klor helps him get over it.)

In the pool, you see a massive egg, apparently made of gleaming silver. Retrieving it, you find it to be non-magical and non-organic.
Posted by Peter C. at 12:44 PM No comments: 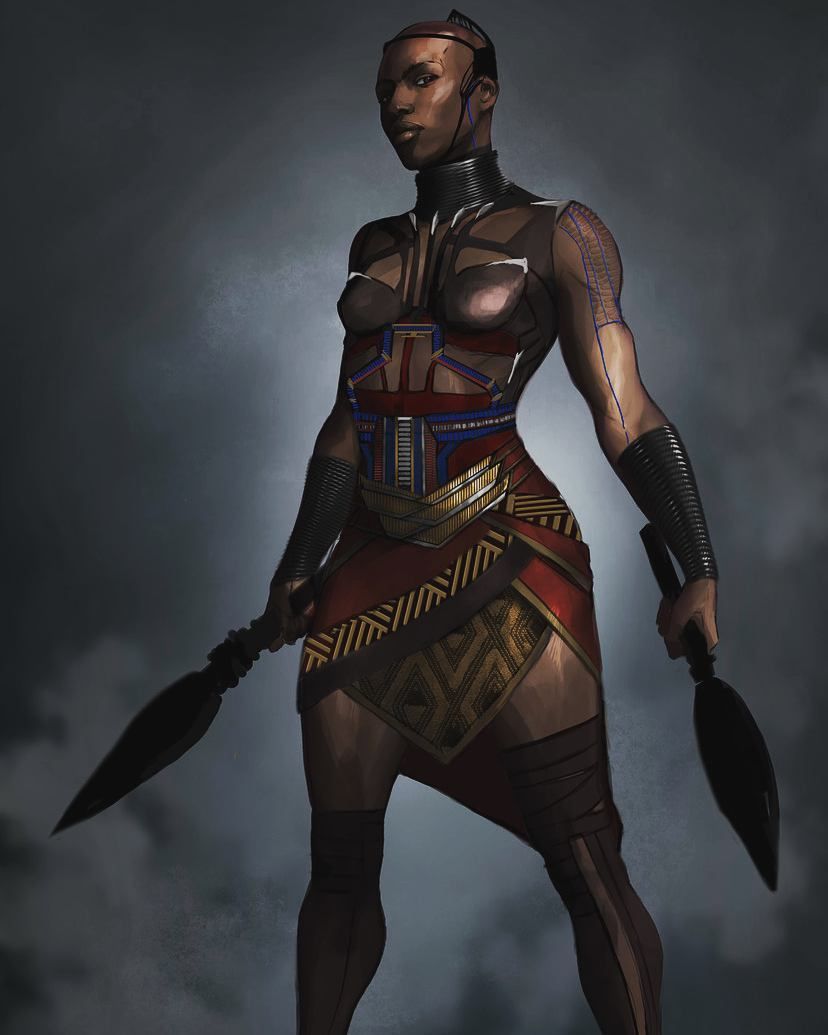 It's another crisp, bitterly cold winter day in this land. At least the sun is shining. This doesn't please Fangstench who, though blind, seems distressed by the feel of the sun's rays. You locate another exit from the den and deposit him in the shade of its opening along with a supplied of goodberries and rations, then bid him adieu, uncertain what fate awaits him.

Trudging back toward the human village you'd passed earlier, you cross the battle plain, still strewn with the fallen. Just as you approach the forest edge (see regional map), Dracul's eagle eyes spot a shape in the sky. A bird? A dragon? No—a great three-masted ship! From the cover of the trees you watch it glide silently overhead, apparently heading toward Elvanna's tower. It seems to be about 150 feet in length and very broad in beam.

Cade shapechanges into a giant raven and, with the party made invisible by Gil'Doren, quickly bears Dracul, Gil'Doren, and Juan skyward in turn and deposits them near the main mast, amidships, on the upper deck of the ship. The only creatures you see are nine robed humanoids—the eerie tentacle-fingered beings from Leng you encountered in the Frost Giants' lair. Five are on the quarterdeck, while four others are clustered near the bow.

While Cade flies invisibly alongside, Juan sneaks down into the vessel's hold and explores the bales, barrels, and boxes of goods therein. He finds exotic textiles, a strange grey ash, and an unknown gelatinous substance. He also notes that much of the hold is devoted to metal cages, apparently designed to hold humanoid creatures. You recall that these creatures were rumoured to be slavers...


The ship glides to a halt near the apex of the tower and guards from the latter quickly lower a broad gangplank of sorts. A gaggle of frightened peasants is prodded into action: their job, it seems, is to unload cargo. Down into the hold they go, back up onto deck bearing their burden, across the gangplank and down narrow circular stairs into the tower. Juan follows and trips one of them, causing a commotion. Now visible, he grabs the dropped item and insinuates himself into the line of stevedores—unnoticed, for the moment.

Meanwhile, Stiepan the crow, perched on Cade's shoulders, has been cawing excitedly: he recognizes many of his friends from the raven aerie in the tower (situated one level below the apex). They call back, alerting the rookery master: she gazes suspiciously out. Still invisible, Cade opens a few of the cage doors and knocks others over. The commotion spreads!

On the ship, something arouses the suspicion of one of the Lengese. It descends from the quarterdeck and begins slowly moving along the length of the ship, its masked face scanning back and forth as if looking for something. Dracul and Gil'Doren can almost feel magical tentacles probing their thoughts...  and their thoughts are of escape! Cade swoops in and carries Gil'Doren over to the tower, then veers back to retrieve Dracul.

The Lengese who was investigating the ship turns abruptly and shouts something to its fellows. In turn, the human guard captain barks an order. Near Gil'Doren, a guard raises a horn to his lips—and is suddenly interrupted when an unusually tall Elf materializes from thin air and cleaves the horn in twain with a pair of swords!

It looks like all hell is about to break loose...