The Hârnic Sandbox: Another Twenty Questions 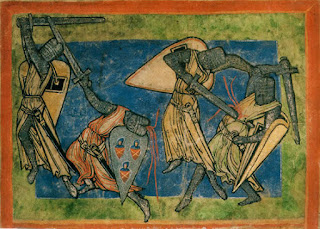 
You teleport to Elshavel and spend a pleasant afternoon in that wondrous realm of the Sindarin. Cade consults with the gardner Yar, who has been having some difficulty cultivating the vegetation you brought from the Underdark. The tree he has awakened adopts the name Ulassa and the pronouns "they/them." Gil'Doren explores his new home — the house bequeathed to him by his former mentor in wizardry— and stumbles across a cache containing some interesting items, including a Ring of Resistance, a Tome of Valour, and various financial records relating to his mentor's house and her arcane consulting business. Juan also "explores" other rooms in Gil'Doren's pad and discovers some erotically tinged drawings which pique his interest. He then, with Dracul, ventures forth to party with the elfs. Gil'Doren, meanwhile, meets with one of Queen Aranath's advisors and expands upon the party's request for aid.

On the morrow, the party meets with Queen Aranath. She delivers unto you four Sun Blades (two swords, a dagger, and a spear), heirlooms of the clans of Elshavel, to aid you in your confrontation with Malevix. In addition, each member of the party receives cloaks and boots made by the Sindarin. Eight potions of Water Breathing are also provided should you seek to contact the storm giants.

You Wind Walk to the northeast, covering the leagues to Kaldor with great speed. By mid-afternoon you approach the north gate of the walled town of Tashal (pop. 11,400), the second-largest city on Hârn and the royal seat of the kingdom. The guards and townsfolk alike are astonished by the arrival of such a motley company — claiming to bear a message for the king, no less! There is a short delay as messengers run back and forth (and while Gil'Doren and Cade entertain the gathering crowd with magical displays). But as you obviously bear the favour of the Elf Queen, you are soon admitted to the royal castle for an interview with the elderly King Miginath. As you are ushered into his court, you note the tensions between various factions angling to seize the throne once this childless monarch dies.

"What news from our friends the Sindarin of Evael?" is the question you must answer.


What: A sandbox-style D&D game set in a loose adaptation of N. Robin Crossby's Hârn, a fantastical analog of medieval Britain. The system is Basic/Expert D&D (Moldvay/Cook & Marsh). It's FLAILSNAILS-friendly! Ideal for PCs of levels 1–4 in old-school systems.
When: Wednesday 13 February and every second week thereafter, 7–9 pm PST
Where: Roll20
Who: All are welcome — no experience necessary.
Why: ...
How to get started: Roll up a new B/X character (or use the random character generator below to get one in milliseconds) and sign up on Roll20 at the link above. (FLAILSNAILers: just bring a PC you'd like to play, bearing in mind the "handicap" table for high-level characters in low-level games. You may, or may not, also want to take into account the extent to which your PC might stand out or blend in while adventuring among the humans, dwarfs, and elfs of Hârn.)

as proposed by Jeff Rients

The setting is not canon Hârn, nor is the game intended to be especially Hârnesque in the sense of striving for medieval realism. This Hârn merely provides a fund of geographical and sociopolitical details that serve as the backdrop for good old D&D shenanigans. I roll on lots of tables, only some of which have anything to do with Hârn.

Finally: this game is all about player agency. Be whomever you want, do whatever you want. But it's also about a safe space for the exercise of your imagination. If it were a movie, I'd suggest a PG-13 rating in the MPAA classification — that is to say, in the Indiana Jones and the Temple of Doom ballpark. In our exchanges, I look forward to exemplary civility and respectfulness as you and your comrades plot how best to slay monsters and take their stuff. Or save the world. Or achieve spiritual enlightenment. Whatever turns your crank!
Posted by Peter C. at 11:49 PM 3 comments: