As you prepare to leave Caldeth's keep with Lady Philisia and her infant in tow, you detect the sound of movement near the entrance; someone has entered behind you! After some prowling about, you come face to face with a robed, masked figure who claims to have entered the keep to investigate trouble after seeing the two gaolers flee in panic from the front gate. Convinced of his good intentions, you outline the treachery afoot in Caldeth's fief. The man, who identifies himself only as "Cleric", decides to join you in your quest to preserve Kaldor from the threat within.

As these introductions are occurring, a Sending arrives from Klor: he urgently requests a conference, stating that Queen Aranath of the Sindarin realm has important information to convey to the allies. You Transport via Plants to Azadmere, location of one of the scrying crystals lent by the queen to faciliate communication and, after an emotional reunion with Klor, contact the queen.  Meanwhile, Cade, traditionally uninterested in palavering, returns to Caldeth's keep: Lady Philisia stumbled and did not succeed in making it through the portal to Azadmere!  Requiring rest before he can cast the spell again, he attempts to entertain the lady by introducing her to his menagerie of intelligent creatures, including a recently Awakened crab.  For Philisia, it is all a bit too much: the trauma of detention, encounters with fiends and aberrations, violence, and now talking plants and animals begins to take its toll on her mental well being. She becomes listless and withdrawn, wondering if this nightmare will ever end...

Back at Azadmere, the scrying crystal hums to life and the Elf queen relays her news. The Elves have discovered activity at the abandoned Earthmaster site of Pesino on their western border: it has been sealed against them. In light of your enemies' various connections with other Earthmaster sites in eastern Hârn (Telumar, Cherafir) and the one in the Underdark near Maslorius's home, Aranath suspects there is some evil purpose at work, some link between their ultimate goal and the artefacts or knowledge of the Earthmasters.  She provides you with a map of known Earthmaster sites on Hârn and suggests you investigate several to see if the forces of the enemy are active there as well. After some reflection, you turn your attention to one of the nearest: Elkall-Anuz, the famed centre of Ilvir-worship and known source of many of the monsters that walk the lands.

But now you must rest and await Cade's return. Klor invites you to take part in a test of the Dwarves' secret weapon: a giant metal construct in the shape of a Dwarf warrior. Powered by some mysterious Khuzan technology, the construct is controlled by a team of pilots occupying cramped cockpits in the construct's head and limbs. Each of you takes up your position, with Klor in the "brain" issuing commands through a speaker tube. Your first test run is underwhelming: the construct stumbles over its own feet and executes an ungainly faceplant. "Hrrumph," mutter the engineers as they set to work on the thing once again.

From Azadmere in the north you teleport to Gil'Doren's home in Elshavel, elven city of the south. Delivering Philisia and her son Quilian into the care of the Elves, you hope for her swift return to health. After another rest, you Wind Walk north toward Elkall-Anuz; here, Izdrel parts ways with you and returns to Tashal to report to Countess Curo and deliver to her the proof of Caldeth's treachery.

It's a rare sunny winter's day as you float across Hârn, fighting a strong headwind. By the end of the afternoon you find yourselves above a great crater-like depression, perhaps two miles or more in diameter. It is strewn with huge boulders and honeycombed with a maze of caves and tunnels; here and there, strange creatures emerge and scuttle about as you skim overhead. A clearly marked footpath extends from the southern edge of the crater toward the centre where a massive jade-coloured monolith rises 200 feet into the sky. A precarious staircase of sorts, apparently made of giant bones glued to the surface of the monolith, winds up from the footpath's terminus to an opening about halfway up the monolith. As you pass by, you see a procession of robed pilgrims making its way along the path. 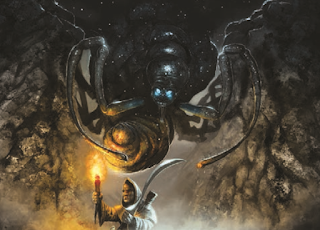 Your elevated position allows you to see what the pilgrims do not: a giant arthropod stalking the procession. Fearing for their safety, you land and interpose yourselves between the thing and the pilgrims. As the alien monstrosity leaps onto the path, the pilgrims flee in fear, knowing neither the creature's intentions nor yours. A battle ensues, but the thing seems to shrug off your mighty blows and potent spells. Finally, a powerful spell from "Cleric" banishes the insect to its own plane of existence. The pilgrims, meanwhile, have begun ascending the staircase, but are forced to leap across several sections where steps (bones) have fallen away. One judges poorly and plummets dozens of feet to the ground. You rush to his side and revive him with healing magic. He thanks you: "I am Somiator," he says, "a follower of Ilvir, the Prince of the Fatherless Multitude. We must make this climb to be worthy of meeting Ilvir within!" When he falls a second time, "Cleric" suddenly sprouts wings and carries him to safety. His fellows rejoice at his safe arrival: "Ilvir wills it!"

Meanwhile, Maslorius-as-cloud has begun an exploration of the interior of the jade monolith. The passage leading within is a perfectly engineered six-sided tunnel; most curiously, it extends to a distance beyond what seems possible given the outer dimensions of the monolith. (It's bigger on the inside.) The party reunited, you begin exploring a series of strange chambers containing marvelous wonders: a dodecahedral room whose walls are covered in stratified images of incredible realism; a pool of glowing liquid that renders objects invisible; and an eerie mass of green and black coils and strings of energy. What else awaits further within? And what dangers?